Young survivor of deadly shooting has ‘a good day’ 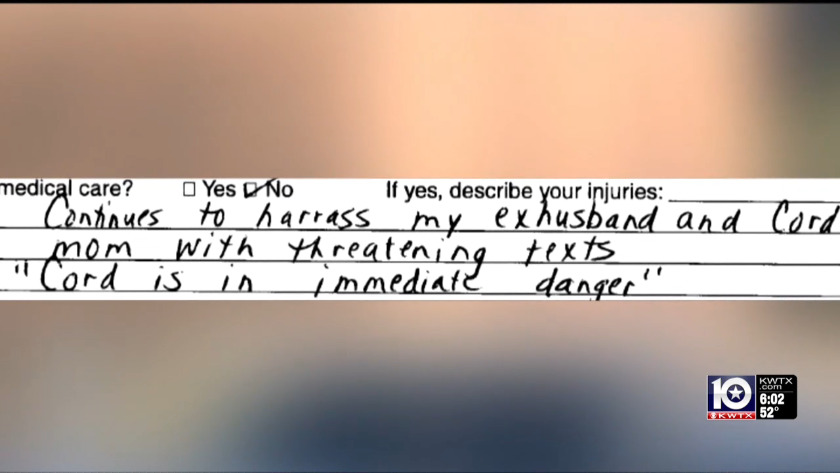 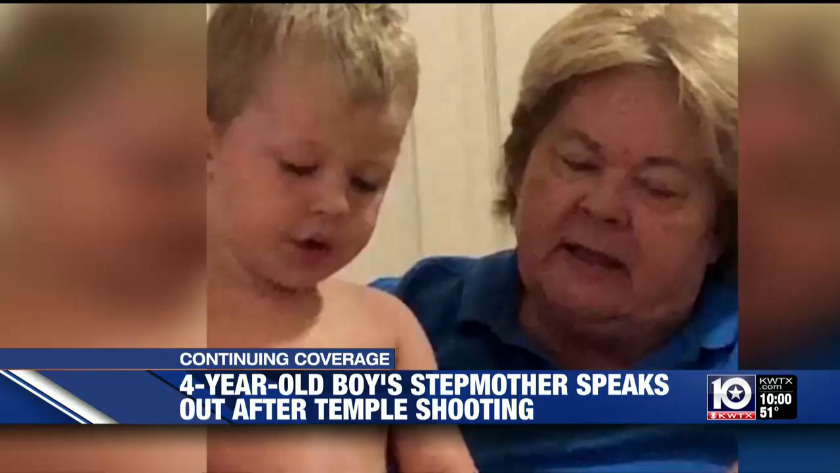 Aunt of sole survivor of triple fatal shooting speaks out 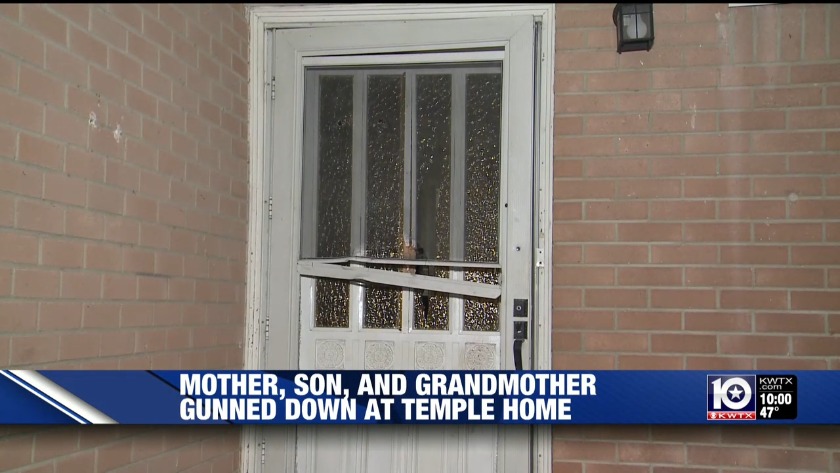 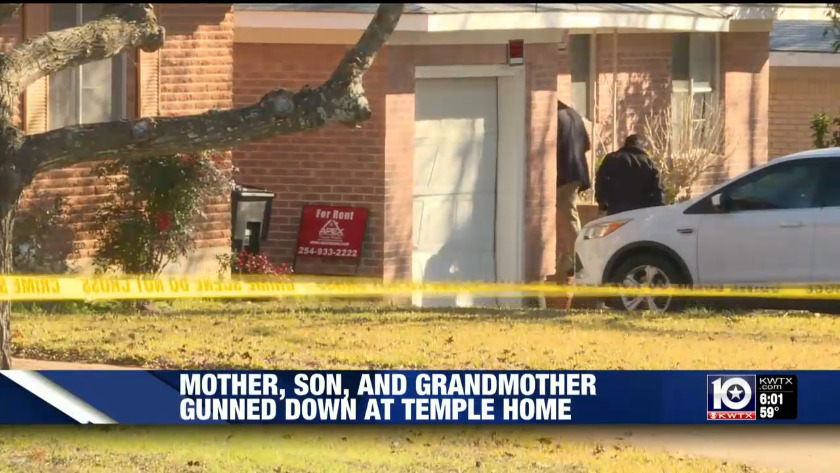 TEMPLE, Texas (KWTX) Corden Fidler, 4, who survived a shooting that left his mother and grandmother dead continues to show signs of improvement although he remains on a ventilator at McLane Children’s Hospital in Temple.

“He was a busy guy yesterday, opening his eyes and moving quite a bit,” his father, Matthew Fidler, said in a Facebook post Thursday.

“Almost all swelling is gone.”

In an earlier update, the boy’s stepmother, Alexandra Fidler, said doctors will reduce the youngster’s sedation and will soon discuss “when to take him off the vent.”

“Although we are not out of the dark and will not know how his head injury has affected him for the coming days/weeks/months he has kicked ass getting through his first six days after trauma,” she wrote.

A GoFundMe effort to raise money to help offset the family’s expenses had raised more than $25,000 by late Wednesday morning

Services have been scheduled for a Belton ISD teacher and her mother, a retired teacher, who were killed in a shooting that left a 4-year-old boy seriously wounded.

Shelly Splittgerber, 36, and her 4-year-old son, Corden Fidler, were gunned down by Splittgerber’s estranged husband as they left their home early Thursday morning in Temple.

Her mother, Sherry Gray, 64, was shot to death inside the home.

Visitation for his mother and grandmother is from 5 p.m. to 7 p.m. on Friday at Crawford Bowers Funeral Home at 211 West Ave B in Copperas Cove.

A memorial service for the women is at 1 p.m. Saturday in the Lea Ledger Auditorium at Copperas Cove High School at 400 South 25th St. in Copperas Cove.

”Cord is in immediate danger”

A temporary protective order was in place against Matthew Splittsgerber, who opened fire on his estranged wife and her 4-year-old son early Thursday in Temple in an attack that left the boy seriously injured and claimed the lives of his mother and grandmother, both of whom were local teachers.

Shelly Splittgerber, 36, sought and received the temporary order Wednesday morning against her estranged husband, citing family violence as the grounds for the order and listing stalking and harassing texts as evidence that she and her son were in danger.

Notice of the order was faxed to the Bell County Sheriff’s Department and emailed to Temple police, according to documents released Friday.

Matthew Splittgerber opened fire on her and her 4-year-old son, Corden Fidler, as they left their house early Thursday morning across from Lamar Middle School in Temple.

Shelly Splittgerber died at the scene.

The boy’s grandmother, Sherry Gray, 64, was shot to death inside the home.

The boy, who was shot at least four times, once in the head, was taken to McLane Children’s Hospital.

Corden's stepmother, Alexandra Fidler, held a press conference Friday night saying, "We are sickened by what has happened, but are humbled by the outpouring of love and support from our blue and red families, as well as complete strangers from the community."

According to the application Sherry Splittgerber submitted for the order, her husband had threatened her “to get out of his house” on Dec. 3 and she left on Dec. 6 to move to her parents’ home.

On Dec. 14, the application says, Matthew “followed my son’s bus at 6:10 a.m. after we had moved out and I told him I wanted to be left alone and want no contact with him.”

On Dec. 17, the application says, Matthew sent Shelly a text reading “When can me meet?”

On Dec. 18, the application says, Matthew continued to harass Shelly’s ex-husband (Corden’s father) and the boy’s stepmother “with threatening texts”.

“Cord is in immediate danger,” she wrote.

She asked that Matthew be required to “seek help for mental issues.”

A hearing on the order was set for Jan. 2 in 264th State District Court.

Mother, grandmother were both schoolteachers

Shelly Splittgerber was a teacher who joined the faculty of Miller Heights Elementary School this fall.

“While new to the district and the Miller Heights campus, in her short few months with us she had already demonstrated skill, integrity, and a strong love for children, qualities that are highly desired and admired in a teacher,” Belton Superintendent Dr. Susan Kincannon said in a statement Friday.

“She went above and beyond to care for her students, and most recently delivered a Christmas tree and ornaments to a Miller Heights family.”

“The Miller Heights school community will be deeply impacted by the loss of their teacher, friend, and colleague,” she said.

“Counseling support will be provided to assist students and staff as needed as they grieve the loss of this special teacher.”

Sherry Gray was a retired teacher who spent 20 years with the Copperas Cove ISD.

She taught at Martin Walker Elementary School where longtime friend Pam Wilburn was also a teacher.

Wilburn’s husband, Mike, later hired Gray to work at J.L. Williams Elementary School in Copperas Cove when he was the school’s principal.

“Sherry was a wonderful, caring, person,” Wilburn said in an email Friday.

“She nearly always had a big smile on her face and an infectious laugh. She truly loved the students that she worked with over the years and was always an advocate for them,” she said.

“More than that, though, she loved her family, Bob, her husband, Shelly, who was their only child and Cord, their only grandchild, who was the joy of her life.”

“It is hard to believe she is gone,” she said.

Copperas Cove Superintendent Dr. Joe Burns issued a statement Friday afternoon in which he said, ““It is with a heavy heart that we grieve the loss of Ms. Sherry Gray. “

“Ms. Gray was an exceptional teacher, mentor and friend. CCISD extends our heartfelt thoughts and prayers to Ms. Gray's family during this difficult time,” he said.

Splittgerber and her son had recently moved into the home with the grandmother, the sources said.

Mother and son were ambushed

Matthew Splittgerber had parked down the street from the house early Thursday and evidently ambushed the boy and his mother before entering the home, the sources said.

He opened fire as a school bus was pulling up to the house, law enforcement sources said.

No other children were aboard, the sources said.

A neighbor also saw the bus.

"I stuck my head out the door and I saw, it looked like a big truck, well it wasn't a truck, it was a school bus," Suellen Moore said.

"So what I saw was the bus was parked...well the house is right next to me...and so it was about halfway into their property and it was just all the lights, all the back of it."

Moore, who lives next door, says the victims moved into the rental home a few weeks ago, and just last week they brought her a piece of cake as the family celebrated Corden's fourth birthday.

"It's so sad, it's just so sad that not only has the little boy, I mean, if he lives he's lost his grandmother, his mother, and his father (stepfather)," Moore said.

The shooting was reported just after 6 a.m. Thursday.

When officers arrived they found the woman and the boy lying in the front yard and heard gunfire, police said.

More shots were fired as the officers tried to evacuate the two.

"EMS was summoned and arrived to transport the child to Scott & White Children’s Hospital, but as the child was being loaded onto the ambulance, a series of shots came from within the house. Officers could not see the suspect who was shooting, but could tell that the shots were coming from the front portion of the residence," police Cpl. Shawana Neely said in a press release Thursday afternoon.

Residents of adjacent residences were evacuated as a SWAT team was called in and attempted unsuccessfully to establish contact with Matthew Splittgerber, who was inside the home.

"Once the officers were unable to make contact with the suspect and it was not known if anyone else was inside of the residence, the SWAT team began making entry in an attempt to rescue any other potential victims," Neely said.

"As SWAT was making entry into the residence, they heard several gunshots, and then one final shot," she said.

Texas Rangers were at the home Thursday assisting in the crime scene investigation.

Schools were locked down

Lamar Middle School and Jefferson Elementary School were locked down because of the incident and remained on a soft lockdown through the morning.

Because of the shooting, Temple ISD officials adjusted release times at the school, whose students were to have been dismissed at 12:30 p.m. Thursday.

Buses were loaded at 11:30 a.m. after lunch and ran normal routes.

Children were released for pickup at noon on the south side of the building on Shell Avenue, where they were dropped off Thursday morning.

“Temple ISD worked under the guidance of Temple PD and there were no reported incidents involving students or staff throughout the entire day,” Temple Superintendent Dr. Bobby said in a statement Thursday afternoon.

“The safety of our students and staff will always remain our top priority.”

Parents of students at the two schools were contacted through the district’s Skylert communication system, which provides information by phone, email and text.

“It's OK to be scared as long as you know that your teachers and principals are going to be there and they are going to make sure you stay safe,” Johnson said.