Community stunned by death of coach who changed lives 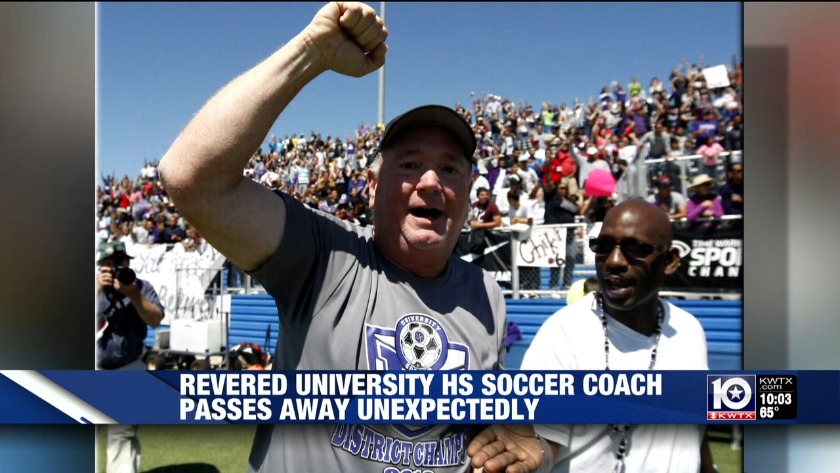 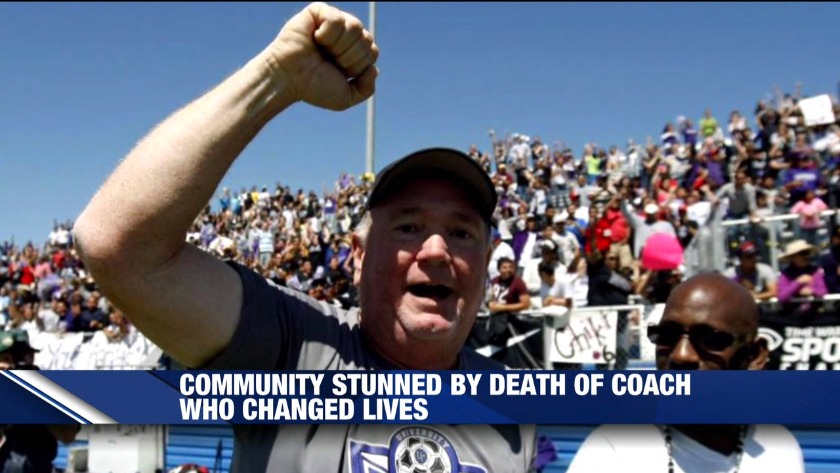 WACO, Texas (KWTX) Word of the unexpected death of University High School soccer coach Mike Chapman left more than a few people in tears Wednesday as the school district and the community it serves grieved the loss of a friend, mentor and father figure.

University High School soccer coach Mike Chapman and his players were at least as well known for their service to the district and the community. Chapman died suddenly Tuesday night. (Waco ISD photo)

According to family members, Chapman wasn't feeling well on the sidelines, and when he got off the team bus to go to his vehicle, he fell.

They say it was so foggy out, no one noticed him for about 10-15 minutes.

When they did and 911 was called, emergency crews tried to resuscitate him for about an hour, according to family members.

Despite their efforts, he died at Baylor Scott & White Hillcrest Medical Center of what was evidently a heart attack.

Visitation is from 6 p.m. to 8 p.m. Friday at the University High School Performing Arts Center at 3201 South New Rd. in Waco.

“He made sure his student-athletes were students first and made sure they excelled, and I quote him, ‘in the classroom, in the community, and on the field.’”

A safe space was set up Wednesday at the high school for grieving students and staff, the Waco ISD said.

Hundreds gathered after school for a vigil and balloon release in Chapman's honor, many included former players.

"We wanted to say goodbye to Coach Chapman for one last time," said Oscar Gomez who was on Chapman's 2013 state championship team.
"He was a really inspiring person, you know."

Many members of the campus community were in shock at the sudden loss.

"I mean, he was a staple: if you knew University, you knew Coach Chapman," said Amanda Lloyd, Former UHS teacher and girl's basketball coach.

English teacher Sarah Tipton has only been with UHS for four years, but says Chapman's impact was obvious. "He had a big huge heart, he's definitely left a hole here."

"There is no one who loves these kids more than Mike Chapman," said Tipton.

The 58-year-old bachelor never had any children of his own: his kids were his students, and the feeling was mutual as his team came to the hospital, concerned about the man many considered a father-figure.

“We join University High School and the entire South Waco community in grieving the loss of a true gentleman who made such an impact as a coach, teacher and friend.”

“He was a positive role model and father figure to many.”

But he and his players were at least as well known for their service to the district and the community.

The Trojan soccer team paid visits to hospitalized children and nursing home residents, helped with Meals on Wheels, participated in the annual Food for Families drive, Toys for Tots, the H-E-B feast of Sharing, and Jump Rope for Heart, and spoke to students in local elementary schools about “What it Takes to be a Student Athlete.”

And for more than a decade, Chapman and his teams made Christmas dreams come true for hundreds of local elementary school students through his Make a Wish Come True program.

“His generosity and kindness during the holiday season was a joy to witness,” Kincannon said.

Chapman started the Make a Wish Come True program 11 years ago asking the community to help him grant the wishes of a handful of students.

“Some might say his biggest accomplishment was winning a state championship, but it was being a role model for his students,” his brother said.

“From taking his team to visit sick children in hospitals, to delivering Meals on Wheels, he wanted to instill a sense of community in his players,” he said.

“The Make-a-Wish program at Christmas was his favorite way to give back to the children of the South Waco community and we will make sure it continues.”

Colleagues, players and former players say Chapman’s influence on their lives was profound.

"Students who come back to this day you know these guys are grown. These guys have families and they're still wanting to give back so we like to think that the seeds we planted when they were in high school are still there today and still growing and a huge part of that is because of coach,” said Sgt.1st Class Leonard Montelongo, head of the University High School Junior ROTC program and co-director of the Make-A-Wish Program.

"He's a Waco legend. There will never ever be another Mike Chapman never ever again. He meant a lot to thousands of kids and I can truly say it was thousands just because of how long he was a teacher and how long he's a coach for. He's affected everyone in some type of way,” said Adrian Barragan, MVP of the 2013 state championship soccer team.