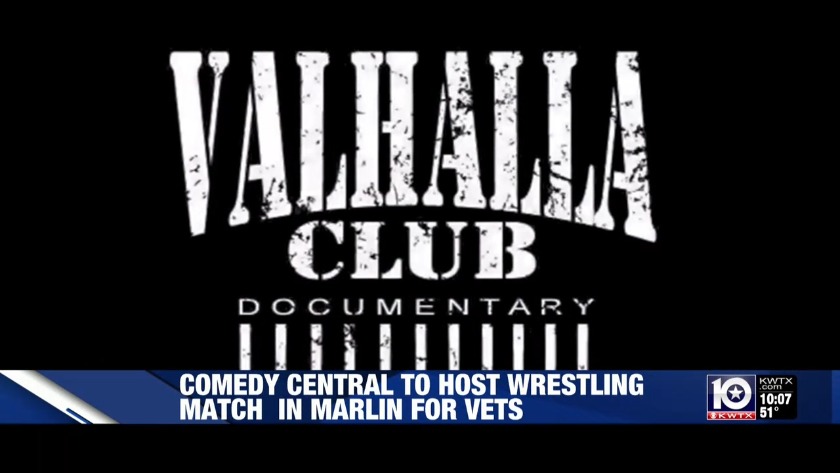 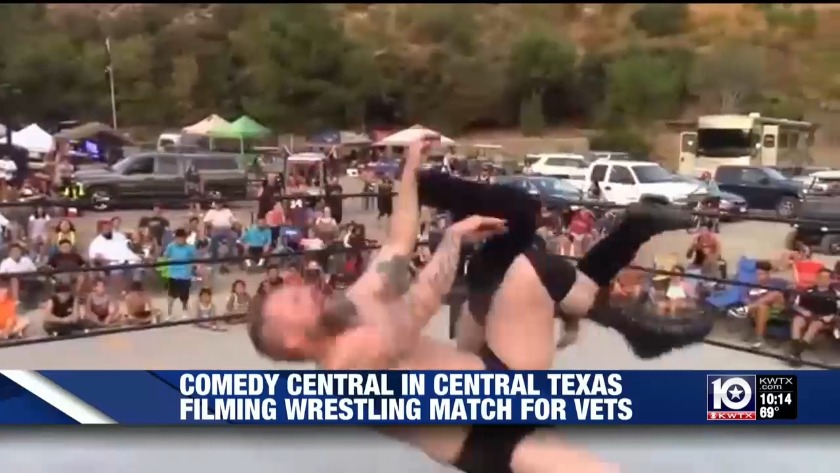 MARLIN, Texas (KWTX) Comedy Central is coming to Central Texas – but what it’s for, is no joke.

The cable network’s upcoming weekly TV series with former host of ‘The Opposition’ Jordan Klepper is tackling the battle soldiers face when they return home from war by following three area veterans who use professional wrestling to fight PTSD and advocate for improved services for vets.

"Producers for a new show called the 'Klepper' show saw our article in Rolling Stone and thought it was a really positive thing and wanted to take it to a bigger level to tell a story about how we can help our veterans,” said wrestler Jan Ohrstrom.

Ohrstrom, 37, of China Spring, is part of “The Valhalla Club,” the wrestling group he created with fellow veterans Eddie Wittern and John Brazier, which became the subject of a 2017 documentary which garnered national attention for it's unique perspective on 'the demons of war' and how some veterans are coping with them in the ring.

The trio created on the group while out on the wrestling circuit where they bonded over their post-service struggles.

"We started talking more and more about what we saw over there (Iraq) and some of the difficulties we had adjusting, and that kind of led into what I felt was a good story that had to be told about the importance of a positive outlet,” said Ohrstrom.

After serving in the U.S. Army for four years following 9/11, Ohrstrom, who was stationed in Germany with the 1st Infantry Division, says he was honorably discharged following a 13-month tour in Iraq as a machine gunner with the 133rd Field Artillery.

"Unfortunately, like many people, I did not adjust well from war,” said Ohrstrom. "When my time was up, I was just kind of told 'go check in with the VA' and that's it, just kind of shown the door."

He wanted to be a WWE wrestler at age four and started training for it when he was 16, but once his service was over, the combat sport he loved became his way to ‘combat’ PTSD, wrestling the demons of war while bonding with other veterans on the mat and in the audience.

"When you go out there and see other vets coming to talk to you after the shows and cheering for you, that's always very rewarding to do,” said Ohrstrom.

A crowd of about 200 will be cheering-on Ohrstrom and “The Valhalla Club” as they take on more than a dozen other wrestlers (most are also former military) Saturday night as Comedy Central and Heart of Texas Wrestling host a match at the Benitez Building, 300 Winter St., in downtown Marlin.

"We're getting the word out about PTSD and that wrestling is about more than just entertainment," said Zach Shaver, owner of HOT Wrestling.

While known for his satire, Ohrstrom says Klepper’s goal is to use humor to call attention to serious issues.

“It’s a documentary-style show infused with humor: the serious part is PTSD, veterans, the VA, the humor part is Jordan will be doing some of the wrestling with us,” said Ohrstrom who divulged he hadn’t met or spoken to Klepper yet, only producers, as they want the first encounter to be authentic when filming for the show. “It’s a pretty positive message and I’m excited to be a part of it.”

Klepper and his crew arrived in Central Texas Wednesday ahead of the show to help build momentum for the match.

Klepper said he was fascinated when he heard about the unique way these veterans were dealing with some of the trauma they saw overseas and wanted to use his new docu-series as a platform to show it to the American public.

“They're willing to make the ultimate sacrifice for America and I think we feel so pulled apart as a country, two very different sides, I think one thing both sides can agree on is we should take care of the people who want to take care of us and I think you see a lot of people coming back from wars and it feels like their mental health issues aren’t being taken care of," said Klepper.

"These guys are really inspiring because they took it onto themselves to find a creative outlet for the feelings they were going through and find a community as well, and that was something we wanted to highlight," he said.

Klepper and “The Valhalla Club” will be filming a second wrestling match hosted by Comedy Central in San Antonio on Sunday, Dec. 2.

Both events are free.

Seating for the Marlin match is limited; doors open at 5:30pm, bell time is 7pm on Saturday, Dec. 1.

The Town Door Sports Grill is sponsoring the concessions.

"Wrestling has been here before, wrestling has done very well, anything we can do to help veterans in any way I would definitely support,” said owner John Keefer who helped lock down the venue after a last minute switch from one in Temple. “I made some phone calls on Friday and found we had a place that could host it."

Profits from the concessions will go to the Marlin Chamber of Commerce, Keefer said.

"When you think of Marlin, you're always thinking of ‘bad news’ that comes out of Marlin, and here lately we've had some good news, and I think this will be some additional news that will come out of Marlin and will benefit us,” said Keefer.

Keefer also happens to be the Mayor of Marlin, however, he made clear the wrestling match was in no way a city-backed event.