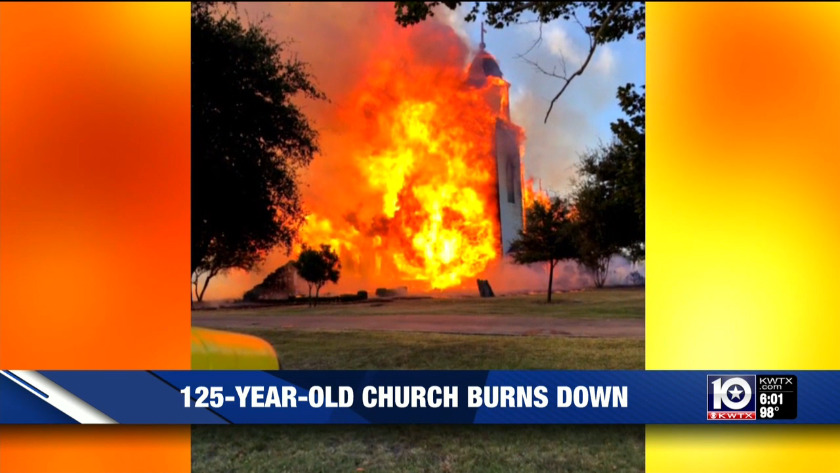 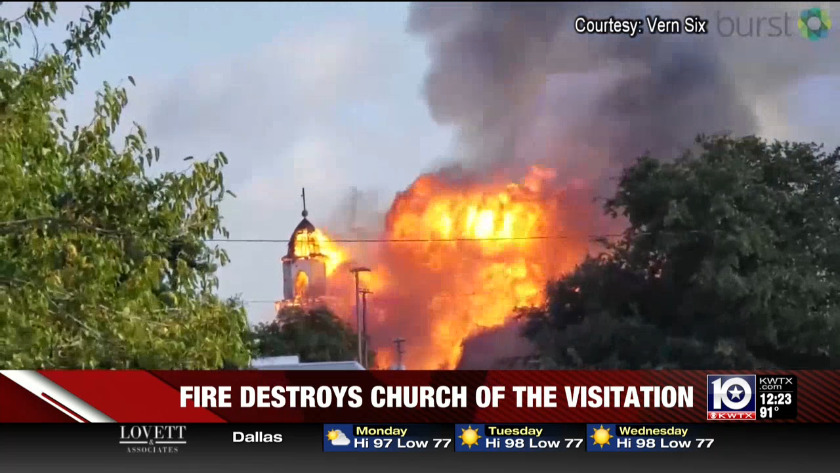 WESTPHALIA, Texas (KWTX) Agents from the Bureau of Alcohol, Tobacco, Firearms and Explosives Tuesday joined the investigation of the fire that destroyed the 125-year-old Church of the Visitation in Westphalia.

State and federal investigators were sifting through the rubble of the historic church for a second day Tuesday. (Photo by John Carroll)

ATF agents and investigators from the State Fire Marshal’s Office were focused Tuesday on the rubble of the church’s South Tower.

The area surrounding the rubble of the historic structure was taped off as the investigators worked.

Insurance adjusters were also at the scene Tuesday.

The congregation was in the midst of planning for the celebration of the 125th anniversary of completion of the church building when the fire broke out Monday morning.

Firefighters from across the area responded to the church at 144 County Road 3000.

Flames overtook the sanctuary, and smoke from the fire could be seen from five miles away.

On Tuesday, church officials established a process for accepting donations to help the congregation rebuild.

Donations to The Church of the Visitation may be mailed to:

The church, with a congregation of hundreds and a rich history, was a Central Texas landmark.

“I’m very deeply affected by this and I know the people here are also heartbroken,” he said.

Residents were able to save the tabernacle, which houses the Blessed Sacrament, from the church as the fire burned, Vasquez said, but little else was saved from what at one time, with its twin towers that could be seen for miles, was the largest wooden structure west of the Mississippi River, according to some sources.

“This architectural beauty is now a loss and that’s what saddens all of us here,” Vasquez said.

Work on the building started in 1894 after storms destroyed two earlier buildings in the 1880s.

The building was designed in the shape of a Latin cross with a bell tower on each side of the center area.

The building contained more than 20 stained glass windows, all shipped to Central Texas from Germany, the largest of which was behind the main altar and depicted the Visitation of the Blessed Virgin.

The building was completed in February 1895 and has been expanded several times in the past century.

In December 1978 the church received a Texas Historical Marker and in May 1996 the church and 5.5 surrounding acres were recognized as a Rural Historic District and were listed on the National Register of Historic Places.

The church was once the largest wooden structure west of the Mississippi River, according to some sources. (Church photo)
2 dead, 5 injured after shooting in San Antonio club
Related Information

(FALLS COUNTY, Texas)--The 125-year-old Church of the Visitation was the second historic church to burn this year in Falls County.

On Feb. 21, fire broke out in the 108-year-old Mooreville United Methodist Church on FM 2643 in Chilton. The church burned to the ground.

Construction of the church building started in 1911 and was completed the next year, but the congregation was established in 1867 with 18 charter members as the Mooreville Methodist Episcopal Church, South. Today the church has about 200 members