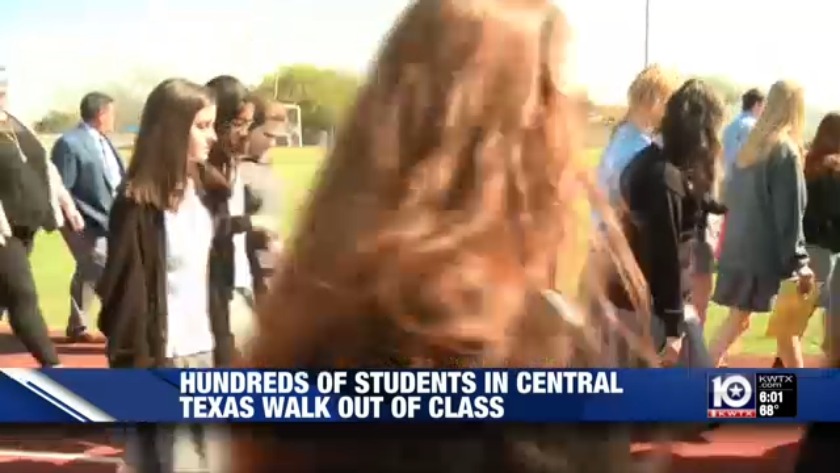 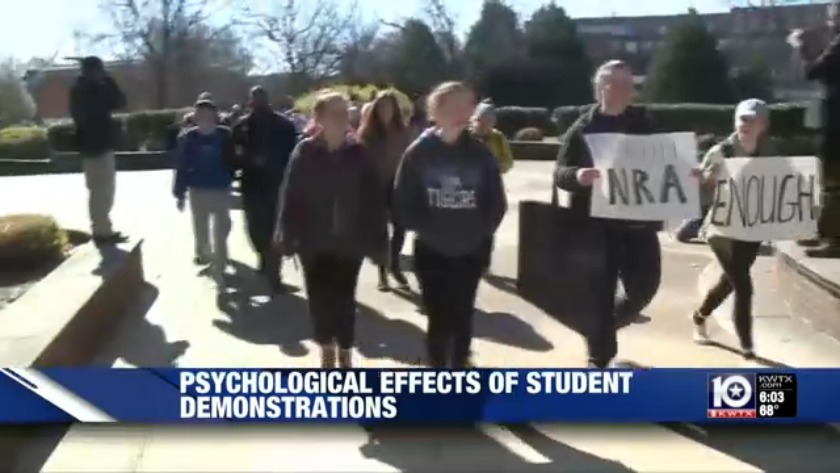 WACO, Texas (KWTX) Hundreds of students walked out of class at 10 a.m. Wednesday at Waco area high schools to honor the 17 students killed on Feb. 14 in a shooting rampage at a high school in Parkland, Fla., and to call for new gun laws and other measures to make schools safer.

The walkout at Waco High School. (Photo by John Carroll)

Students at Waco and Midway high schools gathered at the entrances of their schools for 17 minutes before returning to class.

Students and faculty at Reicher Catholic High School marched in a line around the school's track for 17 minutes to mark the 17 deaths.

At Midway, the school’s principal started the morning with a moment of silence and then read the names of those who died in Florida.

Students were then given the opportunity to walk out, according to a student who helped plan the event.

About 385 students participated, according to an unofficial count.

Jon Singletary, the father of two Waco High School students, was on hand for the walkout Wednesday.

“We feel very safe here at Waco high but we’re very touched and moved by the terrible tragedies in schools across America,” he said.

“We just want to bring awareness to our leaders to make our schools safer. I’m a homegrown Texan. I hunt and have guns and this is nothing about gun control it’s simply a dialogue about certain type of weapons,” he said.

Across the country and as far away as Australia, nearly 3,000 walkouts were planned Wednesday, coordinated by Youth EMPOWER, a wing of the group that orchestrated the Women’s March last year in Washington, D.C.

The organizers are calling for a ban on assault weapons and high capacity magazines, expanded background checks and a gun violence restraining order law.

The 17 students died after a teenage gunman opened fire on the afternoon of Feb. 14 at Marjory Stoneman Douglas High in Parkland, Fla.

The gunman first opened fire outside the building, and then went inside.

At least 14 others were injured.

He was armed with an AR-15 style rifle and had multiple magazines, authorities said.

WACO, Texas (KWTX)—Waco psychologist Dr. William Lee Carter said Wednesday that while some may seek the walkouts as an act of defiance, they’re actually provocative in a positive way.

"When I see the students act in a proactive way by walking out of class as a show of solidarity and a show of support for those people who have been hurt, it emboldens me as a mental health professional."

"They are saying ‘we are going to not only offer you our support, we're going to show it through our actions and by doing that especially by doing it as a group,’” he said.

“They are creating a tidal wave that runs counter to and against hopefully more powerful against, the evil and destruction that comes from these mass shootings." (Ke'Sha Lopez)