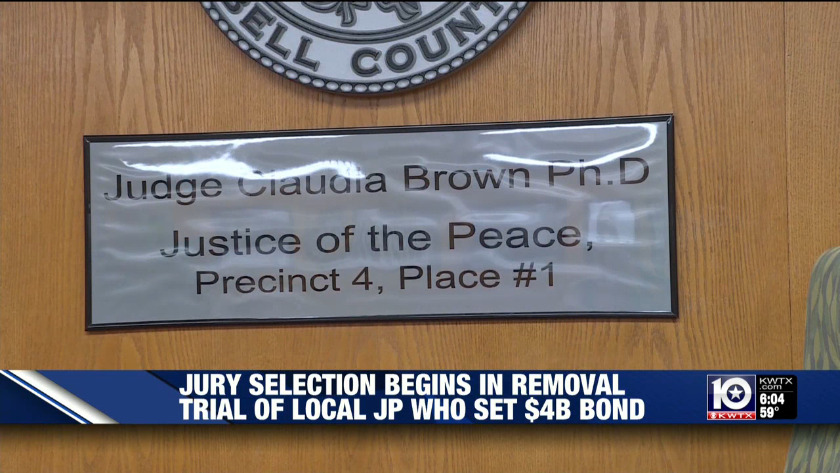 The discussion is scheduled for the commissioners meeting on Tuesday, according to the meeting agenda.

Commissioners have the authority, granted by the Texas Constitution, to name a replacement to complete the remainder of her elected term, which is up at the end of January 2020.

Anyone appointed to the seat would have to run for election in the next General Election.

Brown has five days from the final order to appeal, and if she does and the appeal ends up in the 3rd Court of Appeals, in Austin, that could create an issue, too, because one of the justices on that court once served as Brown’s attorney, which would force his recusal.

An eight-woman, four-man jury returned the verdict early Wednesday evening after about two hours of deliberation.

As a result of the verdict, Brown was immediately suspended from office without pay and will be removed from office as soon as the judge signs the order.

She was given five days in which to appeal.

Stephen Ables, senior judge of the 216th District Court in Kerr County, was appointed to hear the petition after all of Bell County’s district judges recused themselves.

He told Brown Wednesday the trial was difficult.

“Everybody thinks the world of you," he told her.

"You’re a credit to this community. Everybody really thinks a lot of you, but the statement of the jury says we need to abide by their verdict.”

Both sides rested earlier Wednesday in the trial stemming from a petition to remove Brown, who, a clinical psychologist testified, has some mental issues that could affect her memory.

Earlier, during a third day of testimony Wednesday, Ables sent the jury out while lawyers mulled the admissibility of a video that the state wanted to place into evidence.

In the video Brown, during an interview with a local television reporter about the excessive bond, said “The (Texas bond) system is a broken system.”

She said she set the high bond in an attempt to bring attention to the problems.

“Ridiculous. It’s ridiculous what we are doing to the citizens of Killeen and Bell County,” she said in the interview.

“We should lower the bonds to a reasonable rate.”

After some discussion the judge ruled he would allow the video to be shown, but only after all other references in the clip were removed, leaving only comments from Brown and no one else.

He was asked by the defense counsel if he thought there were defendants who deserved extremely high bonds because of the nature of the charges, and Garza responded, “There are some (defendants) that I don’t want to make bond because they’re particularly dangerous to others in the community.”

In the case of murder defendant Antonio Willis, the man for whom the $4-billion bond was set, Garza said 27th District Judge John Gauntt later reduced the figure to $150,000, which Willis posted and was released.

Again defense attorneys asked Garza if he thought the new lower bond was appropriate and he answered: “Regardless of what I believe or not, Judge Gauntt set the bond and that’s what it is.

“The reasons she expressed for why she did this have nothing to do with the charges or the law,” Garza testified.

On another issue prosecutor Dallas Sims asked Killeen police Sgt. Matthew McEowen about Brown’s son, who had been arrested on suspicion of driving while intoxicated.

The officer testified he called Brown to tell her that her son had been arrested and asked if he should arrange for another justice of the peace to set his bond.

“She told me: ‘I’m as good as anybody else’ and she set his bond,” McEowen said.

The sergeant then called Pct. 4 Bell County Justice of the Peace Bill Cooke to ask his advice and Cooke told him there was another justice of the peace on call he could contact and suggested the officer do that.

“But,” the sergeant testified, “he said let her decide.”

He went on to say “I felt like arraigning your own son would be a conflict of interest.”

In Tuesday testimony an Austin clinical psychologist said Brown has some mental issues that could affect her memory.

Dr. John Fabian, a clinical and forensic psychologist and lawyer, testified he spent the day with Brown on Nov. 17, 2018 and during that 8-hour meeting subjected her to a battery of psychological tests, which, when analyzed, point to a “brain-based disorder.”

Sims asked Fabian his final diagnosis in Brown’s case and he testified: “She has an unspecified neuro-cognitive disorder,” and he continued to point out it was a mild case.

Later he explained that such a disorder happens in a large number of individuals as they age and “They’ll have good days and bad days.”

He also said he does have concern about “a budding case of Alzheimer’s,” for which he said there is no cure and, which most likely won’t get better.

“In my opinion it’s not going to get any better,” he said.

As the doctor faced cross examination Brown’s attorney asked him if she is competent, to which he responded, “That may be up for debate, but that’s what we’re doing here, isn’t it?”

Also on Tuesday Brown’s counterpart, Cooke, told the jury since Brown took the seat in January 2017, his caseload has brown by 70 to 75 percent.

Cooke also said he looked at 56 death certificates in Brown’s file and found more than three-quarters of them had not been completed since January 2017.

Brown’s master court assistant testified immediately before Fabian and, at one point through tears, said Brown had been “having bad days.”

Brown’s testimony continued for more than two hours Tuesday and she was followed by five more witnesses, some of whom testified Brown, 79, sometimes seems confused in court and her case load, both criminal and civil, has significantly declined.

"It is the most rewarding, satisfying position I've ever held in my life."

"I want to see justice for everyone,” she said.

Brown first took the stand Monday after a jury was selected for the trial.

The Bell County Attorney’s Office says it’s the first trial of a removal petition in the county in 33 years.

A Killeen attorney filed the petition to have Brown removed from the bench. Brown set the $4 billion bond for Willis who drove to Killeen police headquarters on Feb. 2, 2017 walked in and surrendered after he was named in a warrant charging murder stemming from the Dec. 21, 2016 shooting death of Donte Javon Samuels, 22, whose body was found early the next day in the yard of a home in the 300 block of South 56th Street in Killeen.

Brown has denied any wrongdoing, but she has said she knows the bond she set for Antonio Willis was unconstitutional.