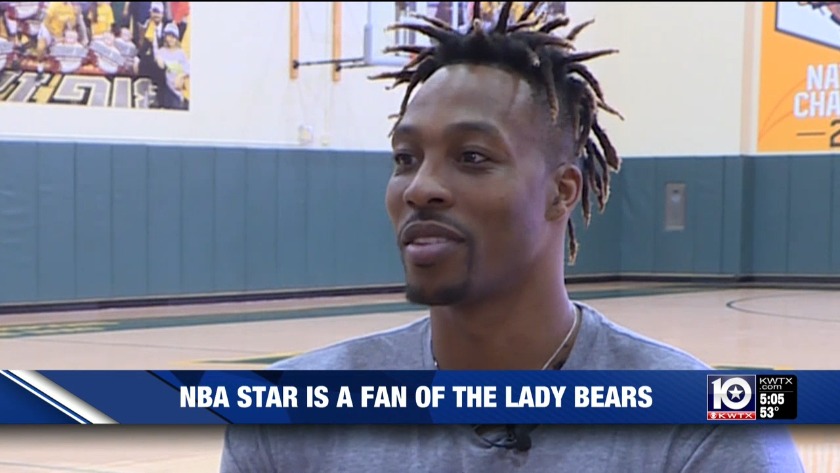 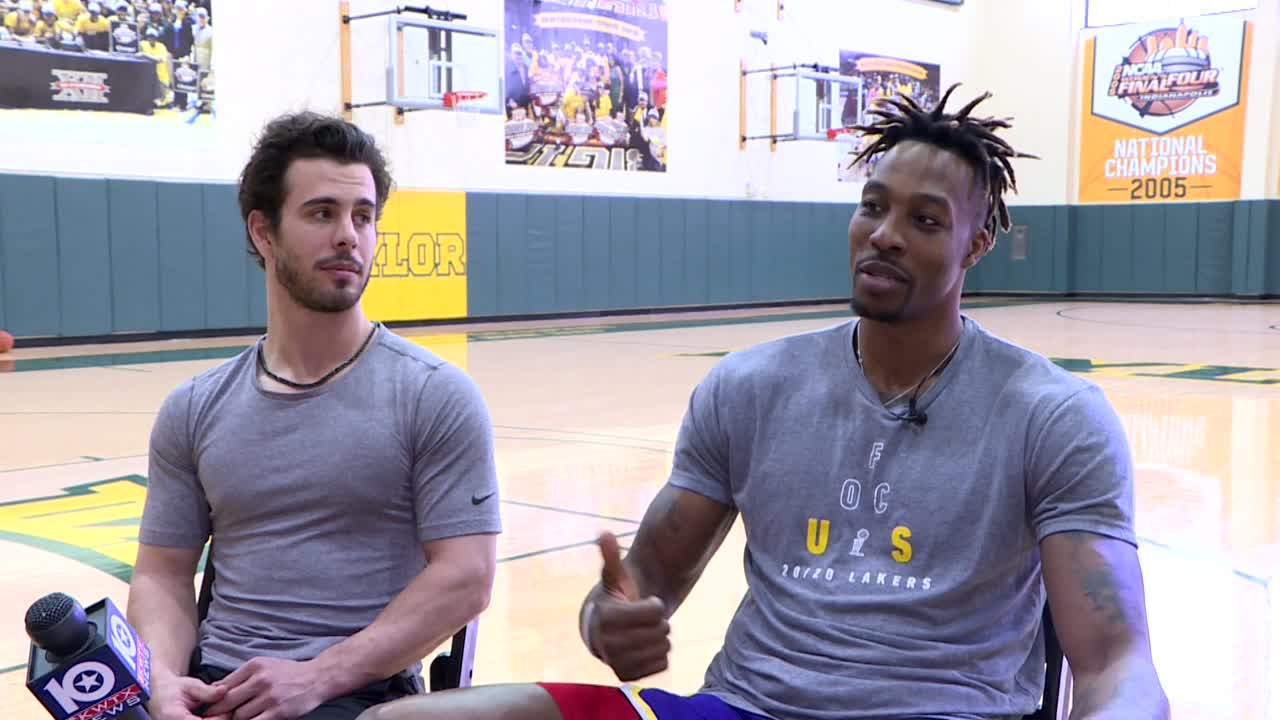 WACO, Texas (KWTX) When Kim Mulkey likely secures her 600th career win Tuesday night at Texas Tech, one NBA superstar will be glued to a television in Waco cheering her on along with a special member of her squad, his fiancé.

The eight-time NBA All-Star is in Waco while the team plays in Lubbock after he flew into town to surprise Cooper during the All-Star break.

"I've been a big Bears fan for a long time," Howard said.

"I haven't had a chance to get to a game this year but I watch all the games faithfully. It's been one of the most exciting seasons for the men and the women, too."

Howard's trip to Waco comes on the heels of his tribute over the weekend at the NBA Slam Dunk Contest to his former teammate and good friend Kobe Bryant, pulling out his signature Superman costume, which revealed Bryant's No. 24 written across the logo.

"I think a lot of us looked at Kobe like a real life superhero. Somebody that could do everything great. He strove to be the greatest at everything and I think that's what the Mamba mentality stood for, while you're in that moment be the greatest you can be."

Howard sat down exclusively with KWTX, alongside Mulkey's son, Kramer Robertson, a rising player in the Cardinals organization, just before the two met to work out together Tuesday afternoon in Baylor’s weight room.

Howard was kind and not rushed at all as the celebrity, who brought along Cooper’s two dogs, freely talked about his fiancé, her team and the coach in charge of it all.

"It just shows the hard work and the dedication toward being excellent and being great and pulling greatness out of all the players she's had here at Baylor."

"Look around, you see all the banners and the pictures of what she's been able to accomplish by pulling greatness out of the all these women. It's something that takes a lot of hard work and dedication but also it takes a strong-willed person to take and mold a young woman into a grown woman and I think she's done and amazing job with all the student-athletes she's had over the years."

Cooper, a close friend of former Lady Bear Chloe Jackson, came to Waco this season as a grad transfer from South Carolina where she led that team in scoring.

She just scored her 1,000th career point, a feat which Howard, who met Cooper through a mutual friend and trainer, says is hard to come by in college hoops.

"She's doing an amazing job on both ends of the floor. She's been amazing all year," he said with a big smile.

"To reach 1,000 points in college basketball is pretty tough. She's only had two full seasons before this so it's been great to see her progress all year long. Playing with a new team is usually tough but for her, she's been superwoman."

Howard, an Atlanta, Ga., native, says he’s known of Mulkey's Lady Bears for years and kept a close eye on them when his friend, Mariah Chandler, who attended the same high school as he did, played for her on the 40-0 team in 2012 which won a national championship.

Howard says before he knew the head coach, he took note of her great coaching and outfits, too.

"I knew that Kim was crazy but she could dress really nice," Howard laughed.

And she does a great job with the women."

"She really does a great job of firing those women up and keeping them motivated through a long season because when you're as good as this team has been over the years there's times you could really lax off but this is one of the few teams I've seen where she has everybody disciplined. They're in the weight room together, they're running together. Preseason I was here, and they were doing a lot of things and I'm like 'wow this is crazy to see this.’”

Howard said he'd love to play for Mulkey, noting she could "no doubt" coach men's basketball at any level if she ever wanted to.

"I would definitely play for Kim," he said. "She could do it. She's a great motivator."

Howard praised all of Baylor athletics and says they’ve built a reputation nationwide as a powerhouse is multiple sports.

The lovebirds have not set a date yet for their wedding.

Howard says Cooper is focused on bringing home some hardware to Waco first and then preparing for the WNBA draft.

Before Robertson and Howard hit the weights, they each had a prediction.

Howard thinks Cooper and the Lady Bears will bring home another national title and Robertson said he believes it’s in the cards for the Lakers legend, too.

“I think it's destiny,” Robertson said.

“They’re going to win it this year and I think it's destiny for the Lakers as well.”

"This whole time through the ups and downs of Baylor University my mom’s been a steady," Robertson said.

"She's been a shining light and she's always been someone Baylor fans can look to and be proud of.”

Is that allergies or coronavirus you're feeling?