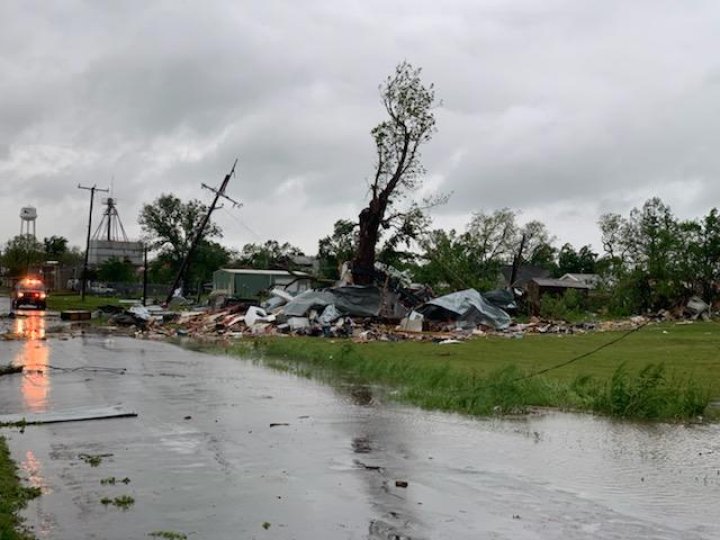 Reaction from citizens in Franklin

FRANKLIN, Texas (KWTX) Clean up and recovery continues in Franklin and other parts of Robertson County after a preliminary damage survey confirms an EF-3 Tornado touched down in Robertson County Saturday morning with peak winds at 140 mph.

Franklin ISD announced Sunday that it has canceled classes on Monday.

The National Weather Service says survey is still ongoing and will take a few days to assess the other areas.

Officials said more than a dozen people were injured in some fashion, but most injuries are reported to be minor.

Residents on the south side of Franklin are advised to boil their water until further notice.

In an evening news conference, officials asked that food and other donations be taken to the Brazos Valley Food Bank, because the Franklin Food Bank was sustained major damge by the tornado.

Much of the area lost power, officials said Entergy lines took a direct hit and it could be take up to 72 hours to get most of the power restored.

Sightseers were urged to stay away and officers will be on 24-hour shifts to patrol the damaged areas.

Volunteers wishing to assist should call the EOC to be put on a list and will be contacted when needed, at 979-828-6680.

If animals have been lost, or if you need a safe place for your pet whhttps://cms.clickability.com/cmsile you are cleaning up storm debris, the agricultural extension office, located just outside of Franklin, is offering assistance.

As of Saturday evening, about 4,000 residents are without power with it likely being late Sunday before electric is restored to most areas.

The city was placed under a mandatory curfew from 8 p.m. Saturday to 7 a.m. Sunday.

Those who were injured were being sent to The Methodist Church to be checked out and for people who were displaced,