Toys for Tots 'saves holiday' for mother of triplets 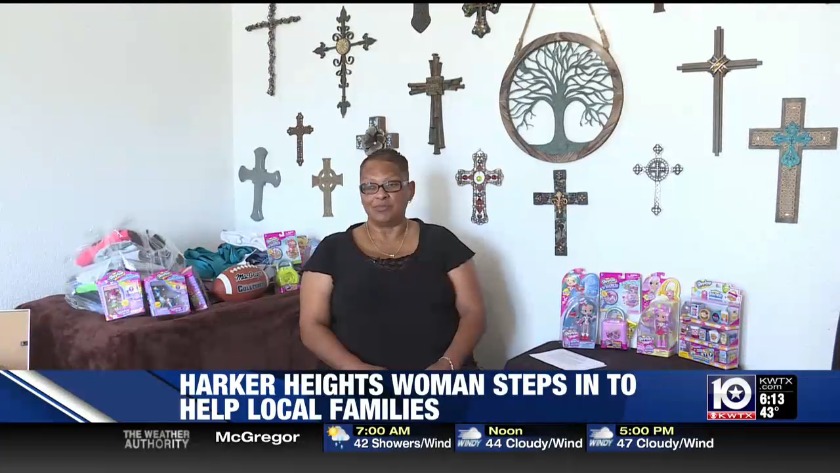 Mother of rare triplets grateful for Toys for Tots

KILLEEN, Texas (KWTX) Lesheca Lynch gave birth to a rare set of triplets, two being identical and one fraternal in 2015.

More than three years later, the girls Zaniya, Adrianna and Zacarri are growing, but still need physical and speech therapy.

The mother of six and her husband Gregory have also taken in family members who needed a place to stay, so resources have been stretched thin for the couple.

"Christmas wasn't going to happen to be honest because the year has been a little tough," says Lynch who adds that she put the Christmas tree away after realizing that they couldn't afford presents this year.

"The kids were all mopey and sad because sometimes they don't understand that life does get hard."

Lynch later found out about Toys for Tots, registered to become a recipient and also shared the info with family members who were also having a tough time.

She was put in touch with Belina Ruff who runs the non-profit Pretty with Beads.

Ruff moved to Harker Heights last year and wanted to help out with the annual toy drive.

Typically, families pick up collected donations in different areas of Central Texas, but Ruff found out there was no one distributing directly from Harker Heights.

She contacted the Marines who run the collections and volunteered to set up drop-offs and pickups to help families right in her neighborhood.

"When a father loses his job or a mother is sick and unable to care for the kids or unable to work for whatever reason, I really think that them just knowing that someone cares and that someone is willing to help does a lot," says Ruff.

Although the cutoff date has passed for families to register for assistance, she says will continue accepting requests through Christmas Eve.

She is also collecting clothing donations that will be given out with the toys.

Ruff has spent time praying with Lynch who appreciates the fellowship along with the support to give her kids a merry Christmas.

"It's okay to talk about your struggles; help is out there- you just have to talk. There are people that will listen and also help in other aspects," says Lynch.

"Thanks to Toys for Tots, we are going to have a blessed Christmas."

If you would like to donate clothing, register for assistance in Harker Heights, or help the Lynch family, email Belina Ruff at Toysforyouphil419@gmail.com.

(KWTX)—Friday is the deadline for donations to the annual Toys for Tots campaign.