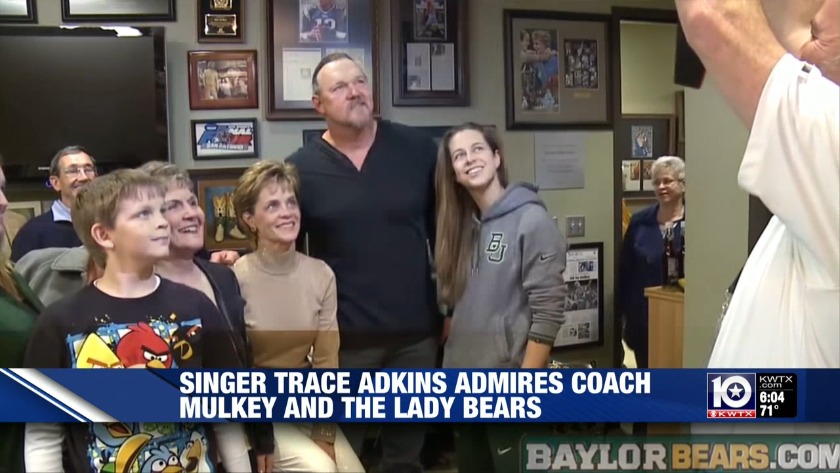 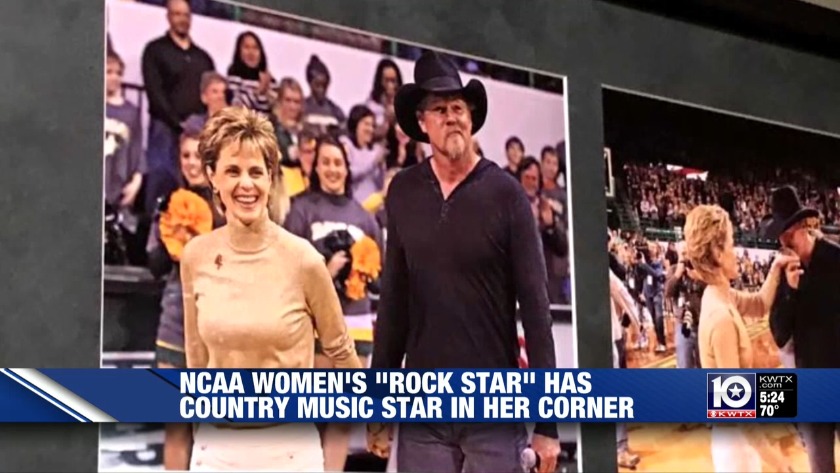 (KWTX) When the Lady Bears take on Oregon in the semi-final matchup of the women’s Final Four Friday evening in Tampa, Fla., a 6-foot-6 fan with one of the deepest, most recognizable voices in country music will be cheering them on.

Three-time Academy of Country Music award winner Trace Adkins sent his well wishes to KWTX to pass along to Mulkey, with whom he’s been friends for seven years, but whom he’s admired for nearly four decades.

“Hey Coach, Trace,” the video message from the road says.

“I got three things. Congratulations. Good luck. I’m not surprised. “

Adkins and Mulkey, both Louisiana natives, attended Louisiana Tech at the same time, he as a football player, Mulkey as the star point guard of the women’s basketball team.

“I had a crush on her when I was in college, kind of worshiped her from afar because she was a rock star on the Lady Techsters and they’d won a couple of a national championship,” Adkins said.

But the two didn’t actually meet until Adkins was invited to sing the National Anthem at a Lady Bears basketball game in 2012 at the Ferrell Center in Waco.

The two now friends walked out hand-in-hand to a screaming crowd.

“He has been so kind in what he has said at his concerts and on his CD I just thought that was the neatest thing because I do love country music and I do listen to his songs,” Mulkey said.

The friendship has been a source of good fun for members of Mulkey’s staff, who placed a cardboard cutout of the singer in Mulkey’s office bathroom, where it remains.

Mulkey also has a note on display that Adkins sent her following his trip to Waco.

And nearly 40 years later, Adkins is still singing and talking about his college crush on the road.

A video posted on YouTube from a concert in El Paso five years ago, catches the country crooner gushing about that point guard he admired from afar, but never got up the courage to talk to.

“When I was going to school at Louisiana Tech I was hopelessly in love with this girl who was the point guard on the basketball team,” Adkins told the crowd.

“I was completely in love with her all through college and completely faithful to her but like I said she was a rock star so I could never bring myself to actually speak to her, but she was my girlfriend,” Adkins joked.

Earlier this year, Mulkey went to San Antonio to catch one of Adkins’ concerts and the two got a chance to visit beforehand.

Adkins will be on stage Friday evening in Biloxi, Miss., when Baylor and Oregon face off, but he plans to record the game to watch after the lights go down.

And he’s got one last message for that young guard in pigtails who stole his heart four decades ago: “Now, go win this thing.”