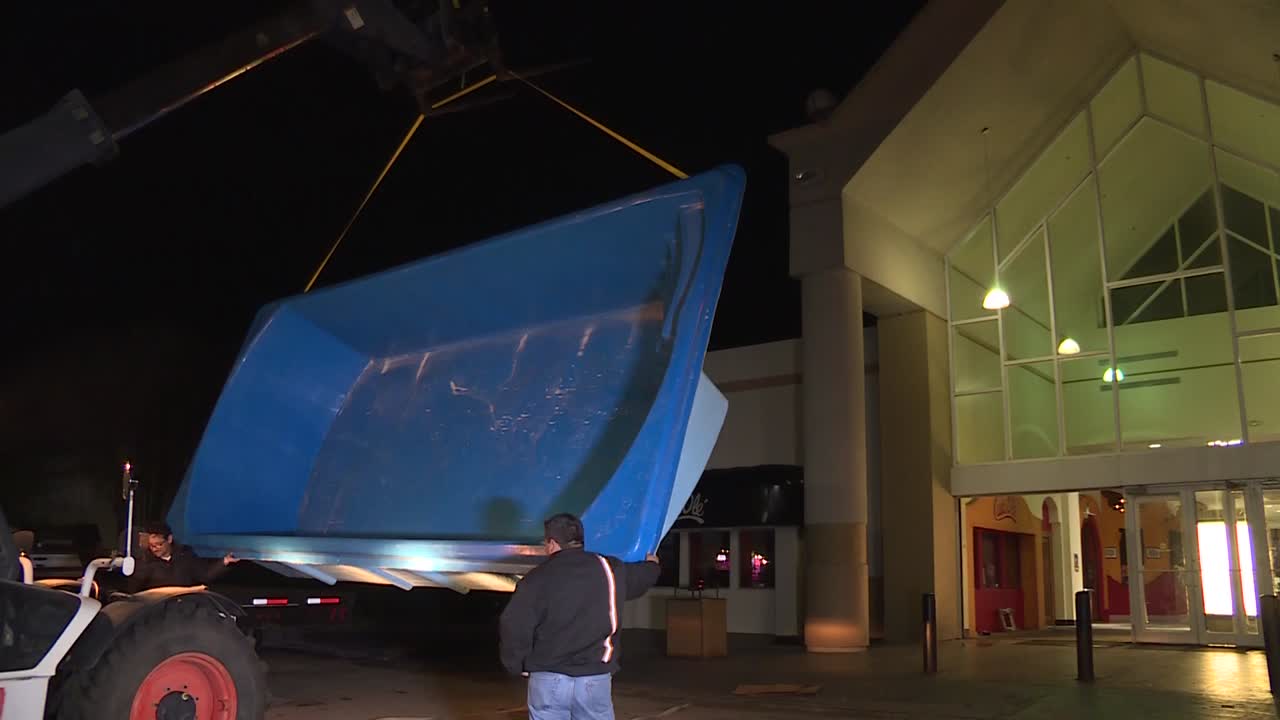 TEMPLE, Texas (KWTX) A delivery of 13 tanks for the 7 Seas Aquarium arrived at the Temple Mall just before 1 a.m. Thursday.

The tanks came from Laredo, Texas and were supposed to be delivered Tuesday night, but ran into logistics problems that delayed the transport to early Thursday morning. (Photo by Megan Vanselow)

The tanks came from Laredo, Texas and were supposed to be delivered Tuesday night, but ran into logistics problems that delayed the transport to early Thursday morning.

The largest tank has a capacity of 6,500 gallons and took operators multiple hours to position it into the aquarium's space.

The aquarium curator, Fidel Junco, said the tubs are touch tanks and will offer an "interactive experience" rather than one where guests are looking at fish behind glass.

The 7 Seas Aquarium will be located inside a section of the old Dillard's location at the Temple Mall, occupying about 40 percent of the former department store.

The company's attorney, Damon Goff, said that once the aquarium opens, visitors will only be able to enter the mall from the outside and not from within the mall.

The City of Temple gave the company permission to move the tanks into the space, but said Wednesday they could not be filled with water or officially installed until plans are submitted and reviewed.

Goff says they are deciding how to arrange the tanks before submitting a floor plan but hopes to invite the city on a walk through of the space soon.

The owner of Shark Supply LLC out of Florida Keys confirmed he is holding fish for 7 Seas Aquarium.

Junco said he put a down payment on the fish back in November.

Shark Supply said the more the project is delayed, the more it's costing Junco.

They say they have worked with Junco many times in the past and often ask him to consult on other client's orders.

According to the fish supplier, the fish are being acclimated while in Florida, and would be ready to enter the tanks at the mall when it opens.

The aquarium first projected a January 2020 opening, then later pushed it to February 24.

Since then, the company has not released an official opening date.

"As far as delays in opening again I don't know of a single aquarium that opened up on time. It's unfortunate that we didn't get to be the first but we appreciate everyone's patience and we hope that you'll stick with us," Goff said.

Memo: Some in US may not get stimulus checks until August